Posted on February 19, 2015 by AnEducationInBooks

Beginning with June of 1939, Daniel, a German Jew, flees Germany by boat. He is alone because his parents only had enough money to pay for one person’s passage. The boat’s 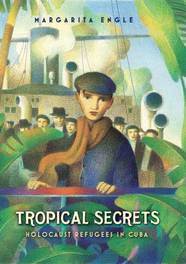 passengers are refused entry to the United States and Canada, and end up in a Cuban harbour for several days, waiting for permission to land.

Tropical Secrets, Margarita Engle‘s historical novel-in-verse, explores the survival and political plight of Jewish refugees in Cuba. Alternating poems from the perspectives of several characters, including Daniel and Paloma, a  daughter of a Cuban official who secretly helps several refugees, provide a well-rounded story.

Wendy BooydeGraaff is the author of Salad Pie, a children's picture book published by Ripple Grove Press. Her work has been published in Emrys Journal Online, The Emerson Review, Jellyfish Review, Bending Genres, SmokeLong Quarterly and Leopardskin & Limes, and is forthcoming in NOON. Read more work at wendybooydegraaff.com or find her on Twitter @BooyTweets.
View all posts by AnEducationInBooks →
This entry was posted in historical, Teen/Young Adult and tagged Cuba, historical fiction, novel-in-verse. Bookmark the permalink.

This site uses Akismet to reduce spam. Learn how your comment data is processed.